Over the last several years our winters in the West Michigan and Northern Indiana areas have brought the issue of damaging ice dams front and center. Most homeowners really don’t pay much attention at all to the ice and snow on their roof until there is an interior leak or icicles prevent entry into their home.

As a roofing contractor and experts in ice dam mitigation the issue of ice dams is one of the primary phone calls we receive during prolonged winter conditions. Most homeowners focus on the ice dams, yet they don’t give much thought to the true problem that causes ice dams in the first place. Ice dams are simply the result of two other problems, a lack of ventilation and insulation. 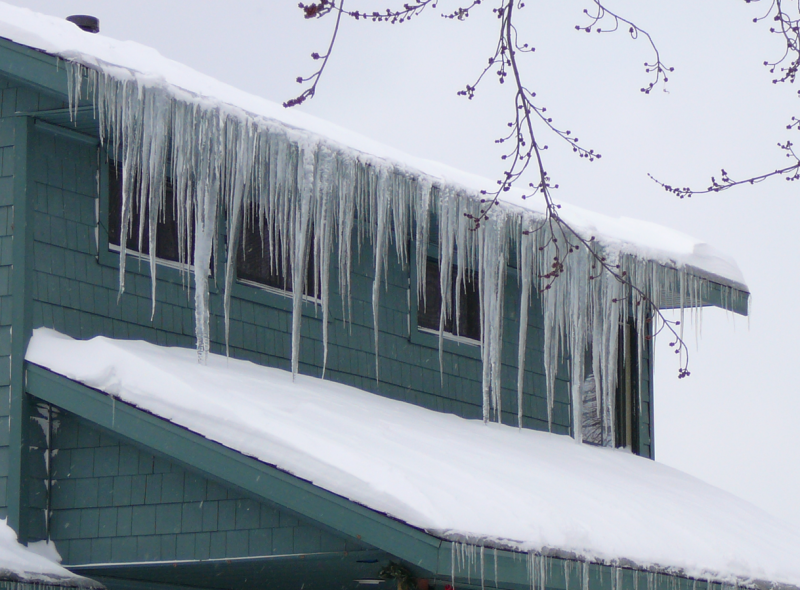 During prolonged winter periods of below freezing temperatures, usually 20 days or longer, ice begins to pile up and overflow the eaves and gutter areas of the roof bringing the visual problem to the attention of the homeowner. Yet, most homeowners don’t give it much thought until there is, as stated previously, interior leakage into the home or icicles that block entry into and out of the home.

So, what causes ice dams? During the winter homeowners heat the interior of their home. That heat rises and moves through the ceiling into and through the attic’s insulation warming the air space above the insulation and below the roof’s decking. Poor ventilation prohibits this warm air from escaping. This heat transfers its warmth through the roof’s decking and warms the shingles on your roof. Now, keep that thought in mind and let’s now focus on the exterior of the home. 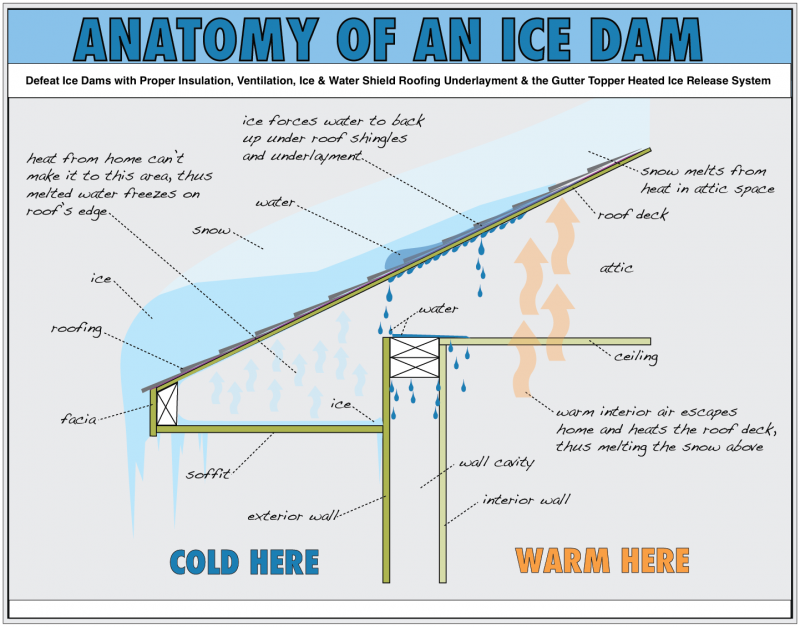 Anatomy of an ice dam

The pitch of your roof is like a mountain and the snow and ice is sort of like a glacier constantly moving down the roof towards the roof’s edge. Snow that falls onto your roof is also an insulator in that it traps the warmth that has radiated through from the attic to the shingles. This warmth melts about the first 1/2” of the snow that is directly above the shingles. This melted snow (water and slush) drains down the pitch of your roof under the snow until it reaches the unheated area of your roofs over-hang and eave edge where it piles up inside your gutter system during prolonged below freezing temperatures and refreezes. This process continues 24/7 and the ice builds up and exceeds the capacity of the gutter system causing the slush and water to back up under the roof’s shingles, behind the flashing of the gutter, where second-story walls meet lower roofs, soffit and fascia systems draining into every crack, crevice and around and past any fasteners. The slush and water refreezes once temperatures drop again during the evening and early morning periods of the day. When water infiltrates into those cracks and crevices and refreezes it expands them and water moves further down into them. This process is why some leaks only appear during the winter and not during the warmer months. 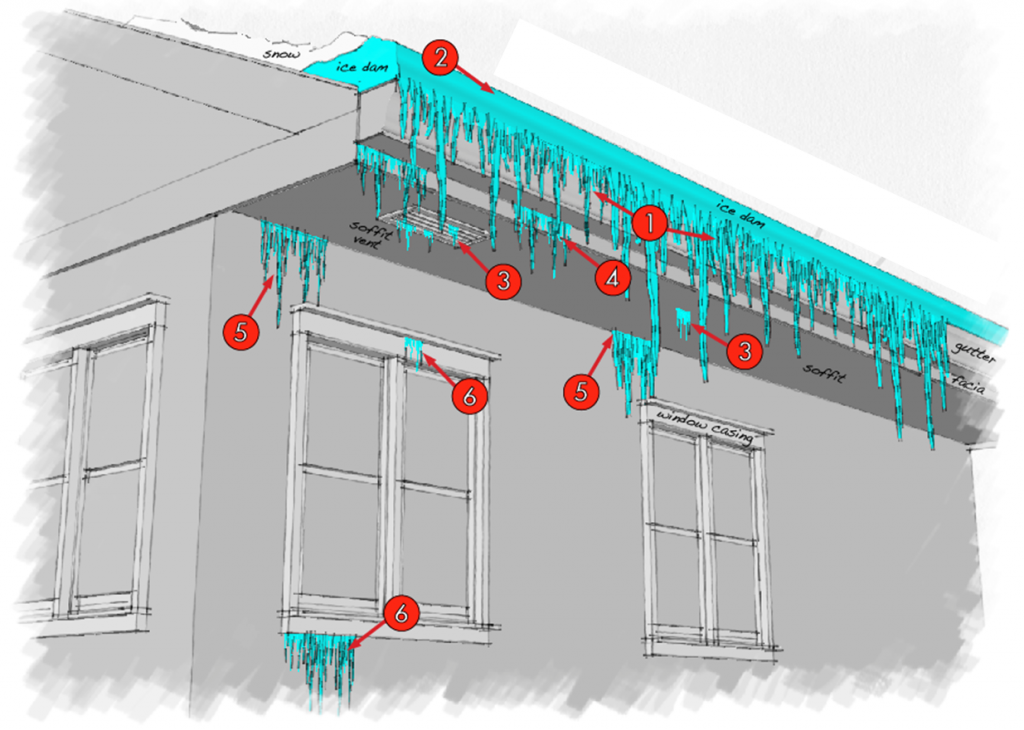 1.) Icicles begin to form 2.) Ice piles up and above the gutter system 3.) Ice forms in soffit vents 4.) Ice forms behind gutters 5.) Ice forms where the soffit and walls intersect 6.) Ice forms above and below windows

The ice buildup or ice dams are the result of a lack of proper ventilation and insufficient insulation. Attic insulation in the Southwest Michigan and Northern Indiana areas as determined by the Department of Energy should have a rating of an R49 to an R60. This level of insulation keeps helps reduce the amount of heat that warms the air above the insulation and gets trapped below the roofs deck. That warm air is then exhausted from the attic with proper ventilation. However, there is only so much a homeowner can economically do to mitigate and prevent ice dams as no one can truly defeat Mother Nature.

Here are a few other Blog links where you can receive other Ice Dam information: 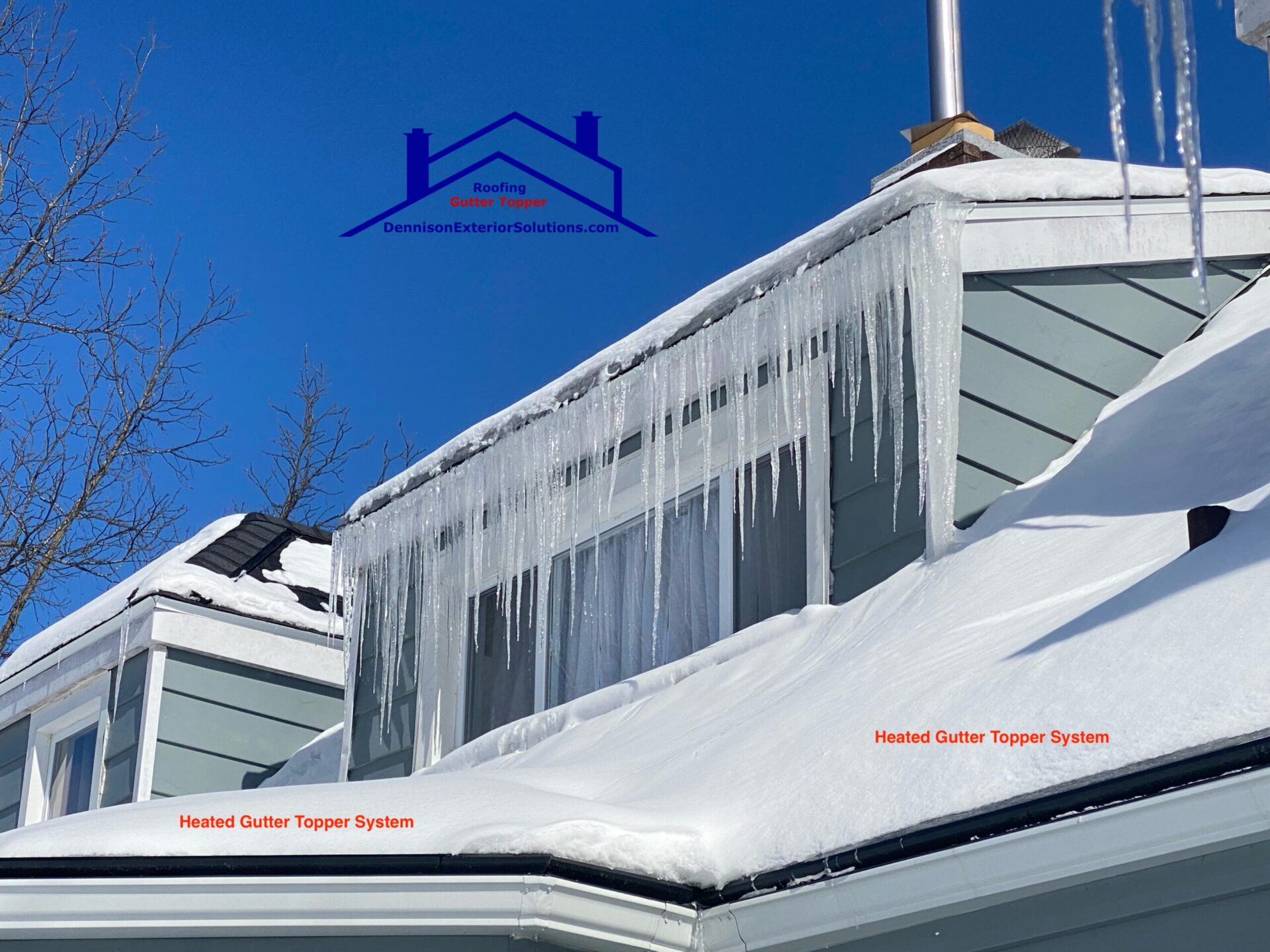