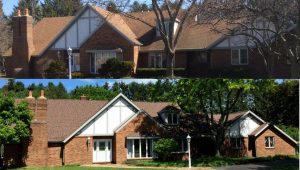 Like many roof projects, they begin with an event that incentivizes homeowners to act before additional interior damage occurs. While many roofs may look nice from the ground however, an

on-the-roof assessment may prove otherwise as in the case of the Oak Terrace Roof and Gutter Topper Project.

Severe Granule Loss on the Shingles

home wherein the contractor failed to match the roofline with the existing roof that created a leak that didn’t show up until several years later. And finally, the chimney in the same addition leaked as well over the past harsh winter of 2014/2015.

Two Typical Leak Points on similar Homes. Bottom of the Corner Post on a Dormer and where the Fascia Board meets the Roof and Valley

We began this project as we always do by meeting with the homeowner to discuss the past history of the home and how it handles the weather both rain and ice/snow. We also discussed their short and long term goals for the home and how we could best resolve the leak issues, the odd lower roofline with the addition, update the attic ventilation system so as to validate the new shingles warranty and lower utility costs while allowing the homeowner to not only create more leisure time by not having to clean out their gutters multiple times every year but to also not subject themselves to climbing dangerous ladders to do so.

As roofing contractors in Saint Joseph Michigan we started this project by placing tarps and sheathing in and around strategic areas of the home to protect the landscaping, walls, windows and doors. That process greatly enhances cleanup and customer satisfaction. As you can see from the attached photos the shingle condition was not as it appeared from the ground.

After removing the older shingles we swept clean the entire roof deck and replaced the rotted wood area where water/ice had damaged the decking and ceilings below.

We then installed all proper metal flashings, installed CertainTeed’s Winter Guard Ice and Water Shield at all eave edges (the 1st six feet), around all roof protrusions (soil pipes, vents and chimneys) and where a lower rooflines meets all walls such as dormers.

On the small addition where there was a 2-inch difference in the rooflines we ripped two-by-fours into strips and installed them onto the existing decking space every 16 inches on center running from the eave edge up to the peak, which resolved two issues. Once the decking was applied on top of the strips this allowed both the roofline on the addition and the roofline on older original roof to match up and also created an air passage for us to install The Edge Vent by AirVent for proper intake venting of the underside of the roof deck that the shingles were applied to. 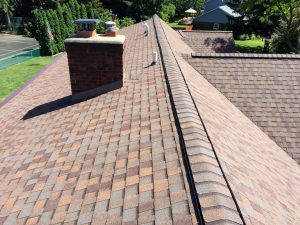 Based on my recommendation and after reviewing other roofs that we installed the homeowner chose a different color of shingle to help accentuate the darker colors of brick on the exterior walls of their home. I have always believed that it is best to either bring some of the roof color down into the siding of the house when homeowners are installing siding or vise versa bring some color from the walls of the home up onto to the roof. Another goal should be to differentiate your roof from your neighbor’s roofs, as you will notice that most homes within a neighborhood have some of the same color schemes since the same builder may have built most of the homes and used similar colors when they purchased their material in bulk.

We completed the roof part of this project by updating the ventilation system in order to validate the new shingles Lifetime warranty that included the 50 Year SureStart 100% Labor and Material warranty by installing AirVent’s The Edge Vent intake vents in combination with their Shingle Vent II product. The homeowner chose CertainTeed’s LandMark Pro shingle in Heather Blend. 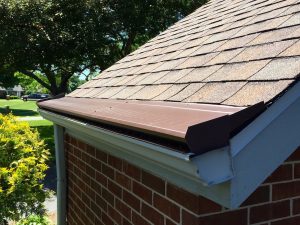 To complete the project as Seamless Gutter Contractors in Saint Joseph Michigan we tuned up the existing gutters by cleaning them out, adjusting the gutters to ensure that the rainwater would drain properly, sealing any seams with clear sealant and as Gutter Cover Contractors in Saint Joseph Michigan we installed the number one rated gutter protection system – Gutter Topper in Royal Brown with a lifetime transferable warranty.

This project is located at: 4825 Oak Terrace in Saint Joseph Michigan