As we discussed in our last Blog homeowners really don’t pay much attention at all to the ice and snow on their roof until there is an interior leak or icicles prevent entry into their home. Or, the media fans the flames of fear of the false potential of roofs collapsing under the weight of ice and snow. That fear is really only applicable to flat roofs covered in 3 to 4 feet of snow in mainly commercials areas where the roof is surrounded by walls and the temperature rises causing rapid snow melt and heavy rain wherein the water must pass through a drain in order to move off the roof. The extreme weight and the inability of the water to drain off the roof is what puts those types of roofs at risk. However, most residential pitched roofs that have a 3” rise for every 12” (3/12 pitch) is not at risk as most truss roofs can handle between 30 to 40lbs of snow per square foot. When homeowners ask the question of how much snow is too much I usually tell them that if the snow gets deep enough to be of concern that weight problem is the least of their problems, in that day to day life as we know it would have come to a complete stop before that point. Yet, many homeowners believe the fear the media has reported. 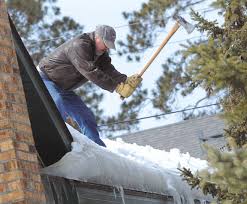 Some homeowners will hire roofers who will falsely claim that they can safely remove this ice and snow without damaging your roof’s shingles. Unless they are only removing the snow along the roofs edge with a snow rake all while standing on the ground other methods will simply prove to be futile and a waste of your hard earned money. Any roofer who gets on the roof during these conditions to shovel or remove snow and chops ice is not only putting their health and safety at risk but will end up creating more damage than they are trying to mitigate by denting your gutter system and loosening it’s fasteners. Not to mention the roofs cold and brittle shingles where they are sandwiched between the ice causes the shingles to crack and break into pieces allowing the slush and water further up the roof to further penetrate the roof area. 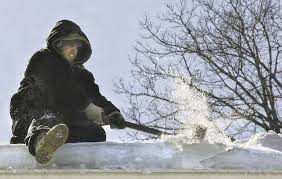 Spending hard earned funds to remove snow and ice one day only to have Mother Nature drop even more snow that evening will simply overcome and defeat your efforts and result in wasted money. Removing snow is a temporary Band-Aid that will be defeated in the next snowfall, putting you back to square one. 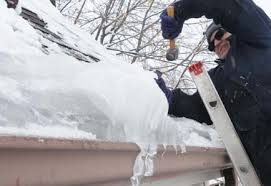 Dennison Exterior Solutions & Gutter Toppers has over 40 years of experience fighting ice dams. Our research and experience has taught us that in almost all cases these methods create more damage than they resolve. Therefore, in our opinion the best measure is to mitigate any interior leaks by confining the melted water to a small area with plastic tarps, towels and buckets until warmer temperatures will allow a complete inspection to determine the entry point and proper repairs to be made.

In our next Blog we will discuss proper ventilation.