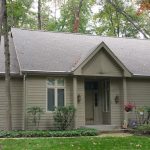 As gutter guard contractors in Granger Indiana we were tasked with providing this homeowner with a gutter protection system that was guaranteed to keep the homeowner from having to climb dangerous ladders to clean his gutters. Like most responsible homeowners who on average clean their gutter system at least 4 time a year, early spring to clean out any remaining leaves that may have fallen after winter began, late spring after all the small debris drops from trees such as buds and seeds, late summer or early fall to clean out any debris that may have collected since the spring and of course late fall once most of the leaves have fallen. However, when you home is completely surrounded by trees then the dangerous task of climbing ladders can be almost an every week occurrence just to maintain a clean gutter system. 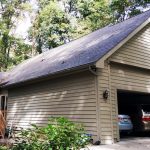 The risks and danger of climbing ladders not including the time to maintain your gutter system are just a few of the potential costs to keep in mind when choosing to purchase a gutter protection system. As gutter guard contractors in Granger Indiana we have over 40 years of experience servicing many of the 40 systems on the market however, we have found that Gutter Topper as proven by independent testing is the only system that can handle all of the elements, debris, rain water flow, wind, heavy snow and ice loads.

Every year, over 100,000 homeowners fall from ladders and are seriously injured. Many fall from heights as low as ten feet and spend an average of $4,000 on hospital co-pays, prescription drugs, lost wages, and physical therapy in order to restore their health so that they can return to normal activity. Gutter Topper costs less than this to install on an average single-story home. A homeowner should ask themselves if the time invested in maintaining their open-gutter system is worth the risks to their health. According to opinion surveys safety is one of the smartest reasons for installing Gutter Topper on their home.

On this home in Granger Indiana we re-attached a two story downspout which is part of the Gutter Tune-up that we perform to a homeowners existing gutter system while we install the customized Gutter Topper system on the home. 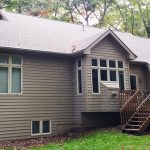 Our tune-up consists of cleaning out the gutters and bagging the debris up, repitching the gutters where necessary, tightening up any loose gutter hangers and sealing up any leaking seams as pointed out by the homeowner.