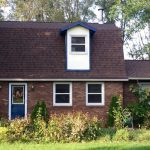 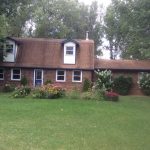 Photo of home Before we started the Project

As roofing contractors in Berrien Springs Michigan the homeowner requested that we perform an inspection of their roof system in order to determine whether or not it was time to replace the roof and or if just general repairs could be made to secure it.

Our office made an appointment and within days of the initial phone call we sat down and interviewed the homeowner about the history of their roof. Upon pulling my vehicle into the homeowner’s driveway I could already tell from the ground that the roof suffered from a lack of proper ventilation more so than others as this roof has a very steep pitch known as a mansard style roof or what some may call a barn roof. During our interview the homeowner was relatively new to the older home and guessed that the current age of the roof to be around 17 years old. In the fall and winter of 2012/2013 several shingles had blown off wherein the homeowner had attempted to repair them himself. In addition, there had been two roof leaks one of which came from a static roof vent and at the eave edge over the entryway light of both had leaked into the interior of the home. The homeowner also informed us that they had experienced ice dam buildup along the front south side of the home as well as the back north side of the home. 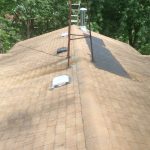 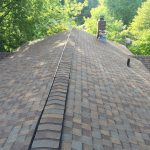 This roofs unique mansard style shape typically does create a ventilation problem wherein the intake vents at the eave edges are not open in the attic to the upper portion of the roof. Typically, if you walk to the upstairs portion of the home you will notice that the height of the walls is only about 4 to 5 feet in height. We call these short wall knee-walls. It is at the point where the upper lower pitched part of the roof intersects with the top of the wall in the attic where the airflow within the attic becomes blocked when homeowners or the original builder/insulation contractor fills the cavity with insulation. It is also very common in homes with roofs styles such as this to have a small entry door into the attic cavity behind the short walls. Many people use those areas for storage as they are sort of like walk-in closets that are hot in the summer and cold during the winter. Many homeowners make the mistake of trying to remedy that situation by blocking off the air movement from any soffit vents so they cover the floor of the attic with insulation and stuff insulation at the point where the upper roof meets the top of the knee-walls. In this case however, there was no access door to the attic however, at some point the homeowner had gained access on the south side front of the homes attic and managed to make some corrections and then closed up the access point. In our interview the homeowner and I concluded that since the intake ventilation had been cut off that this contributed greatly to heat build up and thus causing the shingles to become brittle and also contributed significantly to the formation of ice dams on the front and back eave edges of the roof. 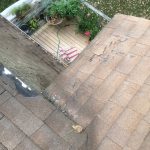 During the old shingle removal process we cut access holes into those two areas and removed the insulation that was blocking the air flow from the additional 16” x 8” soffit vents we installed through the knee-wall attic up and into the main attic of the upper roof. We also added the Heat Deflector Insulation to deflect the interior heat back into the interior of the home during the winter months to help lower utility bills and also help defeat the ice dam formation. Any residual heat (3%) would be vacated by the upgraded soffit and ridge vent system that we installed. 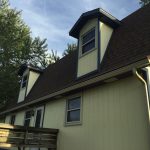 Another part of defeating the damaging effects of ice dams was that is customary at Dennison Exterior Solutions & Gutter Toppers is to install CertainTeed’s Winter Guard Ice and water shield not only to all eave edges but around all protrusions such as the chimney, soil pipes, around the dormers on the home and where the lower garage roof meets the wall of the home.

The previous homeowner has installed a color of shingle that matched the lighter colors in the brick so this time we chose to accentuate the darker colors to give the home a richer color. We installed CertainTeed’s Heather Blend LandMark Pro shingle that included a Lifetime (50 Year) warranty. 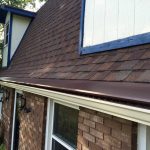 To complete the project as seamless gutter contractors in Berrien Springs Michigan we installed new seamless gutters and downspouts in desert tan and as gutter guard contractors in Berrien Springs Michigan we also installed the industry leading Gutter Topper gutter guards in royal brown to match the new shingles and to keep the debris out of the gutters, keep them free-flowing, remove the dangerous ladder climbing by the homeowner to clean them and to help assist the movement of ice and snow off the roof at a much faster pace with Gutter Topper’s Ice Release™. 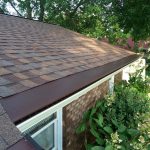